The following is a cozy recipe that will bring you back to the Nordic winter forests. This Nordic Chai has all the spices of a traditional chai, but the protagonist of this version are the fir needles that replace the tea, making this recipe caffeine free.

This recipe brings me to make a consideration regarding Nordic culture and spices. It’s something a friend made me realize for the first time when she visited Finland and made me notice how Finns like to use strong spices. I always thought Finnish traditional food is quite bland, but then again, upon closer observation, oriental spices, especially in desserts, have long been embedded in the Nordic food culture.

Even though spices such as cardamom, cinnamon and peppercorn don’t grow in the Nordic countries, as soon as these spices were imported, they were immediately embedded into the Nordic cuisine. In the Middle Ages oriental spices were very expensive and rare, so only a small part of the population could afford to have them. Also, bakers and servants of nobility and parsonages were very jealous of their recipes back then and so it was a rare treat for the common folks to get to taste desserts with spices and virtually impossible to reproduce them at home (source). In time though, spices became more readily available for a larger part of the population, as became recipes, prices started to drop and that’s when the use of oriental spices took over Nordic cuisine.

You could prepare your Nordic Chai mix by drying some fir or spruce needles and placing them in a jar along with all the other dry spices. This way all you’ll have to do is add some fresh ginger and water and you’re ready to enjoy a truly wintry drink! 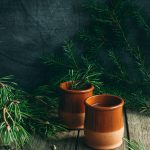 A cozy recipe that will bring you back to the Nordic winter forests. This Nordic Chai has all the spices of a traditional chai, but the protagonist of this version are the fir needles that replace the tea, making this recipe caffeine free.
Cook Time10 mins
Course: Drinks
Cuisine: Indian, Nordic
Keyword: chai, nordic
Serves: 2
Author: Thais FK

Did you enjoy this recipe? Pin it for later! Tried this recipe? Mention @adagioblog or tag #adagiorecipes!
Tags: chai, nordic