Let’s start this off with something highly unpopular and probably counterproductive: I am not a fan of sweet buns, or pulla, like they’re called in Finnish. I find they’re often painfully dry, lack in taste and make me feel so stuffy and bloated. This said, I feel like a weight has been taken off my chest, phew!

The first time I tasted saffron rolls was in December 2014, when I was attending a Finnish language and culture education program and Klaus was having his winter holiday from work. One day I came home and, as he used to do every day during his holiday, he had made lunch. But not only that, he had also baked us a dessert, namely these saffron cinnamon rolls and already back then thought that those rolls were a totally different story compared to any other buns I had tasted until that point.

Fast forward to last winter, we decided to bake and bring our baked goods to some of our friends that live in the same city. Of course the choice is easy, especially because we found ourselves in the possession of a fairly large amount of saffron, gifted to us by a couple of friends. Searching recipes online I disliked the fact that all require a high amount of yeast and the rising time was as short as 20 minutes. No wonder I always feel so bloated after eating buns!

So we started to experiment and the following is the result of our experiment, in two versions: one using yeast and one using sourdough. Both came out as good in my opinion, so you can choose whichever version you prefer.

But we wanted to go beyond, flavorwise, so we introduced a glaze that, I guarantee you, will step up the bun game a notch. I mean, I’ve heard these rolls be called the best rolls ever tasted by several Finnish people, who have eaten buns and rolls all their lives making them not mere experts, but highly trained critiques of sweet buns. I’m talking about an Orange Vanilla Glaze. Sounds delicious, right? Think of the combination of the following flavors: cardamom, cinnamon, a hint of saffron, orange and an aftertaste of vanilla. Heaven, am I right?

Before getting to the recipe, a few reminders: 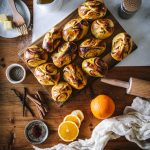 I hope you’ve enjoyed this recipe and you’ll enjoy replicate it! These rolls are really one of my flagships baking goods and I really hope you’ll love them as much as me and my friends and family do! Thank you so much for being here and allowing me to do the work that I love: create and photograph recipes for you all to enjoy!