Did you know that fish is a seasonal food? Like everything in nature, every kind of fish follows his own rhythm and therefore has its own seasonality. Eating a certain fish when it’s in season means eating a fish that is at its peak harvest, so it has already reproduced and it’s found in abundant measure. The seasonality of fish has a direct impact on its sustainability. The Sustainable Food Trust points out how “if fish are being harvested during spawning season, stocks could diminish”. Also, if a certain fish is not season but you can still find it in your stores it can mean three things

In none of these scenarios the fish will taste as good as it would taste if it were local and wild.

How to know when a fish is in season?

But let’s come to the core of the article. As I was researching fish seasonality I realized the Finnish muikku is in season during the autumn and winter months and so I started wondering why on earth such a winter delicacy is only known as a summer street food. To be specific, muikku is in season from Mid-August to Mid-November and from January to March.

Muikku is a small freshwater fish that lives in shoals. It can be found in lakes and it is really common in the Nordic Countries.

How to cook Muikku

Since it’s such a common fish in Finland, Finnish traditional cuisine has found several ways to cook this small but very tasty fish. Muikku can be salted, marinated, poached or smoked. The most creative way is definitely the “kalakukko”, a loaf of rye bread containing a filling of pork and fish, usually vendace.

My favorite way, though, has to be the easiest and is what I would like to suggest to you. It is the way this small fish is sold in summertime in Finnish fairs and markets: breaded with rye flour and fried in butter and oil. The rye bread crust gives to this dish a unique crunchiness and distinct flavor, no wonder this is one of the most beloved finger foods of the country! I encourage you to try and cook some other small fish in season and available in your area in this way, it is truly effortless, but absolutely delicious! 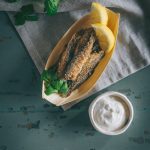 Did you enjoy this recipe? Pin it for later! Tried this recipe? Mention @adagioblog or tag #adagiorecipes!
Tags: fish, muikku, seasonality, vendace

Pumpkin Spice Latte and some Thank You Notes

Newsletter
© 2022 The Adagio Blog. All Rights Reserved.
This website uses cookies to improve your experience.OkLearn more about it