When and how to forage

Fireweed is a common sight in Nordic summer fields. This weed is a true colonizer and rapidly spread leaving no or little space to other species. For some reason many hate it, but it is actually a very underestimated plant, as many parts of the plant can be utilized in different recipes, both savory and desserts.

In springtime, you’ll see fireweed sprout in the fields and will look like this:

That’s a great time to pick the fireweed shoots. Beware, though, the season to pick fireweed shoots is very short as they grow very quickly, thanks to the 18-22 hours of daily light they get. The most tender shoots are the ones that are still completely red. Anyway, avoid picking them when taller than 20 cm. To pick them, either cut them with scissors or a knife or gently uproot them, as the white part underground is the best tasting.

How to use fireweed shoots

How I used fireweed this year was in and on a focaccia. I loved how the shoots on the inside stayed soft and juice, whereas the ones on the surface turned crunchy; a perfect texture combo! 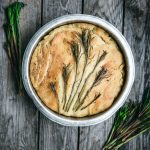 *The quantity of water may vary depending on the humidity of the air at the kneading moment.
Did you enjoy this recipe? Pin it for later! Tried this recipe? Mention @adagioblog or tag #adagiorecipes!
Tags: fireweed shoots, focaccia, nordic foraging