The thing I definitely love the most about this isolation situation is waking up to the smell of Klaus’ freshly baked bread. There is absolutely no other breakfast that can beat that. It’s a recipe he’s known for many years, this effortless bread. And what makes this bread effortless is the fact that you don’t have to knead the dough for a long time, but it’s enough to quickly stir the ingredients together, leave it to rise overnight and voilà!

He used to bake it in an old ceramic stew pot, but once it broke, the era of bread also ended in our house. Until we bought a cast iron pot and Klaus got some forced extra free time.

Looking back to the time we bought from Ikea a cast iron casserole, I don’t even know why I hesitated that day when we were considering whether to buy the casserole or not. Definitely the quality of the bread has improved since we switched from ceramic to cast iron (but don’t worry, if you don’t have a cast iron pot it will still taste delicious also baked in a ceramic pot). Not only for baking, these casseroles make the most delicious slow cook recipes and I think everyone should own one! Be sure to buy one with a lid though, because it’s an essential part for the success of many recipes, including this one.

The thing I love the most about his bread is that it’s very crunchy on the outside, but very soft and moist on the inside. I don’t know about you, but I generally tend to dislike dry bread that feels like cardboard in your mouth.

So yeah, We’ve been doing what everyone else in quarantine is doing: baking bread. The one I’ve been making is basically a rip-off of the famous New York Times No-Knead bread recipe, but with few differences. I used rye and Graham flour instead, to give this bread a more wholesome taste. So, as promised, here’s the recipe: 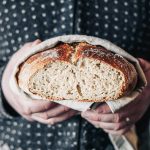 We've been doing what everyone else in quarantine is doing: baking bread. The one I've been making is basically my version of the famous New York Times No-Knead bread recipe, but with few differences.
Serves: 8 slices
Author: Klaus K.

Postcards from the Melting Sea Ice of Oulu, Finland