Since isolation started we carefully plan what we buy from the store. We think about what we want to cook in advance and make a long list before going. We don’t go more than once a week, preferably we stretch to one week and a half. The only reason we need to go between certain intervals of time is mainly because of dairy, which sometimes makes me think whether I should start and lower the amount of dairy in my life, but I love cappuccinos and lattes too much for that. I’ve been thinking that days are getting longer and warmer (I mean, temperatures still punctually drop below zero every night but, all things considered we start seeing few spring signs here and there) so I might survive for many weeks just stocking on almond milk and drinking iced coffee instead, but I’m digressing here.

Few days ago I had a craving for pancakes. It was an unplanned craving, though. We didn’t have milk at home. Nor butter. And we were a couple of days away from the day we usually go to shop. I had a banana and an egg though.

Now, I had tried making banana pancakes before, but for some reason I never enjoyed them too much. I found them too mushy, too… banana flavored? But this time I had no option and a bad craving going on so I decided to give banana pancakes another go.

Since that time I have made the same recipe four times within a week. Either for breakfast or for snack. The great thing is, they don’t have gluten, nor dairy, nor any added sugar! They turned out to be very fluffy, soft, but not mushy and just perfect when paired with honey and berries! So I thought to share the recipe with you too. Believe me, give them a try.

In my opinion the oat flour is what makes the difference here. It makes the pancakes very airy, but absorbs some of the moistness that comes from the mashed bananas, giving them the fluffiest structure. So here’s the recipe, hope you enjoy it and for the next post you’re in for a treat, I just tell you this! Stay tuned by subscribing to The Adagio Newsletter in case you haven’t yet. 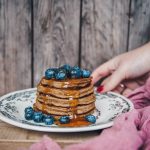 For cooking and various toppings