This is a late spring creation that was born from a very simple fact: both of the main ingredients were on sale at the supermarket. Late season produce is something that’s often underestimated. People are often so excited about the new season coming, that they’re all projected with the new produce that the season brings. Which is understandable, food being a relatively easy way to create a feeling or be transported to a nice memory. And that’s how people get excited about those new potatoes and cherries and strawberries that come from abroad and cost three times more the price they’d cost in just a month or two, but no, it doesn’t matter because, when it’s May, people want to dream of summer and hot July beach days. Going against this trend, I decided to create a very light, summery soup with some late spring produce.

What makes this velvet soup so appealing can be summarized as follows. For one thing, the combo Jerusalem artichoke + asparagus is absolutely divine. I don’t know about you, but until I saw those two ingredients in my grocery bag, it had never before crossed my mind to combine these two vegetables. A second reason that gives an amazing flavor to this velvet soup is the homemade broth. There’s no way around it, it just makes the difference. If you really don’t have time to make the broth yourself, choose a high quality stock. Last but not least, the reason why this soup feels light and summery is because, instead of the classic potatoes and binder, I used zucchini. In general, I encourage you to substitute potatoes with zucchini in all of your summer soups to give them that lighter flavour we all crave when the weather’s warmer. The proof of the soup is in the eating! 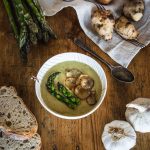 I really hope you enjoyed this recipe! Stay tuned for more seasonal and wild food recipes and subscribe to our newsletter to receive notifications of our latest blogposts directly in your email!