Travelling by train is an unique experience. It is impossible to compare even the very same trip done with any other transportation.

During our honeymoon we travelled trough the capitals of Sweden and Denmark, which are Stockholm and Copenhagen, in a single day. According to the timetable we wouldn’t spend more than a few hours in both cities, so I didn’t plan anything special to do in those two beautiful capitals.

Unexpectedly, we soon realized that you get the chance to do much even we little time! This is because usually railway stations are right in the heart of the city. They actually themselves contribute to create the city center, enriching it with their majestic architecture.

Surely the best way to spend your time between a train and another is to walk, mainly for two reasons: it’s good and vital to get some exercise after being sitting for hours and it is the best way to see what’s around the station. Stockholm found us totally unprepared: Klapsu visited it only once several years ago and it was my first time in the Swedish capital. Besides, my instinct of conscious traveller, that checks every single detail and wants to have everything under control, well, somehow didn’t work this time.

Anyways the walk was very refreshing and not only because it was a chilly day! It gave us an opportunity to have a glimpse of Stockholm and its beauties. Also, we could hear this beautiful language (and speak it, I’m referring to Klapsu!), that is Swedish. Surely we want to go back there another time to know it better! 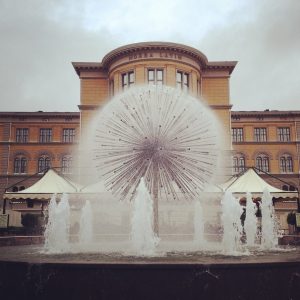 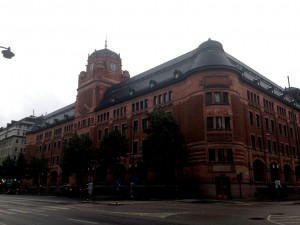 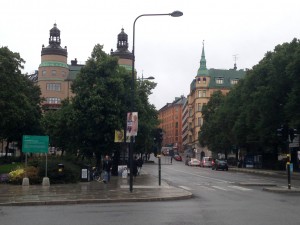 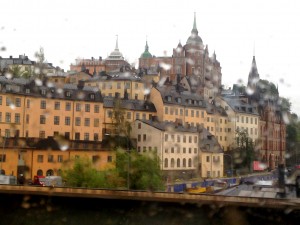 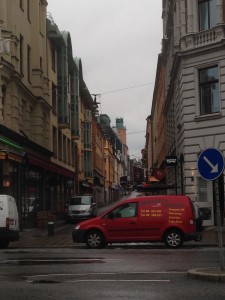 After Copenhagen, here we are again on a train, moving ahead. Timetable would say us that the next stop would be in Hamburg after little bit more than 4 hours. Something unexpected happened, though. At a certain point we heard a Danish voice from the speakers saying we have no idea what. Then the same voice would start to speak German, making it any easier for us. Finally the “voice” starts to speak a third language that we assume would be English. Even so, both because of the noise and because of the weird accent, we understand very few words. What we could grasp was that we had to leave the train and leave our baggage on board. Believe me, I had some minutes of deep confusion.

Ok. Here it comes the moment. So there we are, all in a row like diligent elementary pupils ready to go toward the unknown. Everybody’s out (out where?). We are indoor, in a place without windows or any other kind of contact with the outside. Another voice, this time a clear one, informs us that we cannot stay where we are but we should head to the “upper floor”. Upper floor of what? All the situation was quite awkward. So here we go again, all in a row while climbing those claustrophobically narrow stairs. Till we get to this. What? We actually are on a boat that has in its belly a train? So that’s how it is. The shortest to get from Copenhagen to Hamburg requires to cross from the Danish Rødbyhavn to the German Puttgarden with a one hour journey by boat.

After a second night spent on a train, the following morning we arrived in Vienna, compulsory stop that allowed us to visit some relatives and to visit this beautiful city! Also here we succeeded very well in visiting the place thanks to our dear Mona that addressed us in the most interesting places and served us as a city guide. Here the pictures!