Pumpkin is arguably my favorite autumn vegetable, both for its flavor but also for its incredible versatility. Besides tasting amazing mixed with other vegetables in soups or by itself as the sole star of a velvet soup, pumpkin also works great when roasted as a side dish or in risottos and pastas. The list could go on and on.

Additionally, pumpkin is amazing in desserts too. Pumpkin in desserts works a little bit like apple sauce, meaning that it helps to naturally sweeten them and can be used as a butter and egg substitute.

This pumpkin cake is another family heirloom. My dad bakes this cake every year during the autumn season and it simply is the best pumpkin cake I know of. Imagine the flavors of pumpkin, cinnamon and lemon zest together in a very moist and soft cake, are you not hooked?

And there’s more; this pumpkin cake is gluten free as it uses corn flour. It also requires no eggs, however it does call for amaretto biscuits which contain eggs, so if you want to make a completely egg-free recipe, be sure to use other almond cookies that don’t contain eggs. The recipe asks for milk, but you can easily use a plant based milk and so this cake will be vegan too.

The method for this cake is very straightforward and easy: all the ingredients are placed in a pan and brought to boil, then the batter is placed in the oven and baked. It doesn’t get much easier than this and I assure you the result is absolutely delicious. The cake can be stored in the refrigerator for up to a week and can be enjoyed both cold or slightly warmed up. 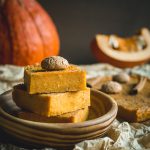 Ruska, the autumn colors of Oulu